Irwin Allen Wiki
Register
Don't have an account?
Sign In
Advertisement
in: Movies, Voyage to the Bottom of the Sea (movie)

Voyage to the Bottom of the Sea (movie)

This article is for the 1961 movie. For the television series see Voyage to the Bottom of the Sea TV show 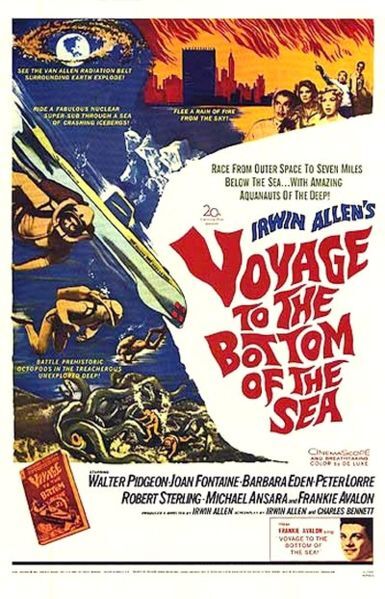 Voyage to the Bottom of the Sea is a science fiction film produced and directed by Irwin Allen. The story was written by Irwin Allen and Charels Bennett. The film was released in 1961 by 20th Century Fox. Walter Pigeon starred as Admiral Harriman Nelson with Robert Sterling as Captain Lee Crane. The theme song was sung by Frankie Avalon.

Admiral Harriman Nelson leads his crew on a scientific expedition to the North Pole in the newly designed and built submarine Seaview. The journey becomes urgent when the Van Allen radiation belt cause Earth's temperatures to rise suddenly. The crew of the Seaview must battle saboteurs and sea monsters to save the world.

Admiral Nelson Crane and his crew take’s the Seaview submarine on a mission like no other. Holding the greatest scientific minds of the time the submarine has only 10 days to rescues the earth from peril. As tension begins to build between the men; Miguel Alvarez a civilian tries to convince the crew that they shouldn’t intervene with gods plans. As the men begin to turn against one another, Dr. Susan Hiller, one of two women on board, attempts to sabotage the mission. Then just as they make it to the correct coordinates to fires the missile to save the world a sea creature attacks Seaview. Luckily they fight off the eight-legged creature of and save the world!

Community content is available under CC-BY-SA unless otherwise noted.
Advertisement